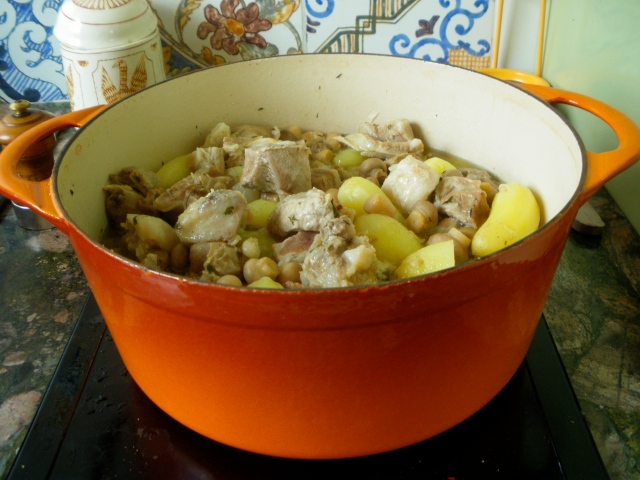 Blanquette de veau made by my mother in St Romans

This is from a very old book called : “La Véritable Cuisine de Famille par Tante Marie” published in 1926 that belonged to my Grand-Mother. My 81-year-old  mother made this for me yesterday using about a pound of veal brisket,  shank, breast or veal stew cut in small chunks. She put them in a mixing bowl and poured boiling water to cover it completely adding salt and a bayleaf. After 20 minutes, she drained the meat saving two cups of the broth. She started the Cocotte Le Creuset on medium heat and added two walnut-sized pieces of butter, two spoons of flour, stirring well with a wooden spoon, while being very careful not to let it brown. Then, she added two cups of the broth, salt and pepper, thyme and parsley and stirred again, adding the meat last (and small pearl onions,  small mushrooms and small potatoes 45 minutes before serving). The stew simmers for about two to two-and-a-half hours on medium low with the lid on.  Just before serving,  she mixed the juice of half a lemon and three egg yolks together then added that to the stew, and stirred the mixture in thoroughly for three minutes without letting it come to a boil.

It was served with a wine called “Blanquette de Limoux”.

The foreword of the book has the following warning:

This cookbook is meant for modest homes where time and money count. (…) these recipes are inexpensive and are meant for 3 or 4 servings. (…) And do you know a house-wife who does not ask her husband 15 times a month ” tell me what you would like for dinner ” and, without fail, gets the answer “Whatever you want!” It is to prevent those questions and answers that solve nothing that we have added  daily menus at the end of the book.

This book is almost the precursor to my blog, what’s cooking today?