Leek salad is a staple of French home cooking coming back to the menu about twice a month. Even children don’t seem to mind eating that vegetable, maybe because of the nice vinaigrette dressing.

Choosing the leeks is the most important part. Best are young leeks with lots of white and light yellow parts  or light green. Hard dark green leaves won’t be tender. When you buy the leeks, also avoid those leeks that have a woody hard core in the centre as they will be hard and fibrous. Good leeks will have tender yellow leaves in the centre as shown in the picture. 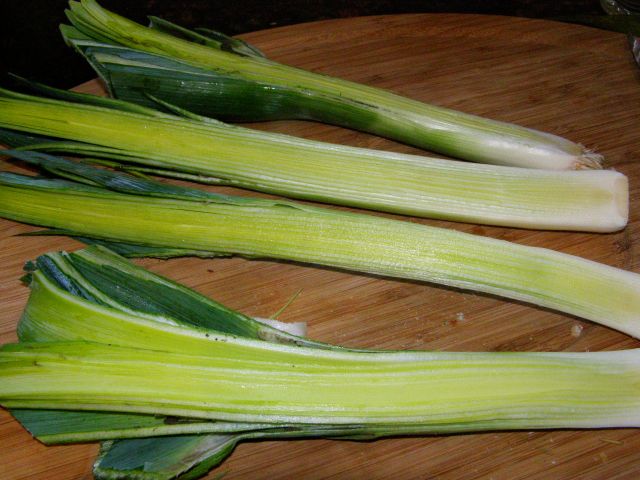 Cut the leaves in half vertically, remove the bottom and rinse well under cold water. If the leeks are very long, you may have to cut them again in half horizontally so you can cook them. Avoid that if you can, as it is traditional to serve the leeks with the whole length, each person therefore getting a bit of white, yellow and green.

Cook the leeks in salted water in a pressure cooker or pot, drain well, keep the broth for cooking rice or soup. Arrange the leeks neatly on a platter. Serve with Dijon mustard vinaigrette, warm or cold. but do not refrigerate. 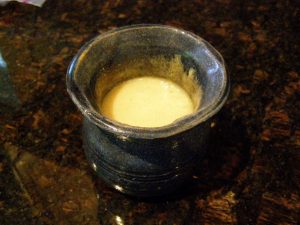 Mustardy vinaigrette in pottery made by CJ Best

Vinaigrette: In a cup or glass, stir one tbsp Dijon mustard with two tbsp wine vinegar, salt and pepper. While you stir with a fork, incorporate  slowly five tbsp canola, sunflower or peanut oil. Keep stirring until your sauce looks creamy. You may have to give it another little stir just before serving.