Posted on December 20, 2010 by thecookingfrog

When it comes to baking, Sharon is a perfectionist. And that is our luck because she has allowed me to share her recipes for the best butter tarts I have ever had. I say recipes, because we are not talking about the average pastry and filling combo here. Rather, this is a voyage back in time and tradition, from rendering the pig fat to produce lard to making the flakiest dough and a filling to die for.

I guess it all started when Sharon bought half a pig from a farmer she could trust. Piggy or should I say his better half arrived in Victoria with all the trimmings, some that no one was too sure what to make of, including a package of fat. Eat Magazine came to the rescue with an informative article about rendering pig fat and how to make leaf lard. That was the lucky break and the excuse to eat the fat! 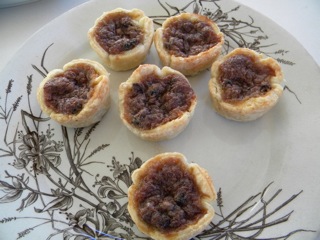 Step 1: How do your render lard? ( excerpts from Eat Magazine Jan 2010) Making lard is not difficult. Rendering is the process of separating and clarifying the pure lard from the fatty  connective tissue of pork fat. You simply chop up some pork fat, (preferably from the leaf or the back) place it in a pot with a cup or two of water and slowly heat it up. By the time the water has evaporated, enough of the lard has started to render out that the remaining solid fat can slowly poach and render at low heat without risk of burning. Let it bubble gently until you have a big pot of melted fat. Strain this and let cool. Portion and store in the fridge or freezer.

Step 2: Pie pastry with home-made lard , excerpts from Eat Magazine Jan 2010 . 2 cups flour, 1T. sugar, 1tsp salt, ¾cup cold unsalted butter cut into small cubes, ½ cup cold lard cut into small cubes, 6-­‐8T. cold water, or mix of half water and half vodka. Measure and sift flour with sugar and salt. Cut butter and lard into the flour mixture until you have flour coated fat pieces that range in size from corn meal to small peas–with more smaller pieces than large pieces. Slowly sprinkle in cold water, 1T. at a time, using a fork to mix the dough. Stop after you have added 6T. of water, no matter what the dough looks like. Turn dough out on to the counter. The dough will be very dry and crumbly at this point. Use your hands to gently gather the dough into a ball using gentle pressure to make it hold together. If the dough is still too dry, sprinkle on  1T. more of water and mix the dough with hands again until you can form it into a ball. In rare cases you will need to add the final tablespoon of water.(If using vodka and water mix, you can be more cavalier about adding liquid because the alcohol in vodka won’t form gluten. Gluten is what will make the pie crust tough.) Divide dough in two and form into disks. This dough can be used right away or  wrapped and refrigerated for a few days or frozen until you need it.

Step 3: Butter tart filling recipe adapted by Sharon from her family’s old recipe books.  ¼ cup melted butter, 1 cup brown sugar, 1 egg, ¾ cup currants or raisins or pecans, (I always use currants), touch of vanilla and salt. Melt butter, mix in sugar, egg, vanilla and salt until well blended. Add currants and mix. Spoon into unbaked tart shells– about 2/3 to ¾ full. Bake at 450°F for 8 minutes and 6-­‐8 minutes longer at 350°F. Let cool for 5 minutes or so and then remove from muffin/tart pans and cool on rack. Makes enough for 6 to 8 regular muffin tin size tarts or 8-­‐12 small tarts.

Final comment by Sharon: I think I am going to try this recipe again with less butter, e.g. 1/2 cup butter and 1/2 cup homemade lard to see how it works because I found it quite rich and think the pastry will still hold together with a bit less butter.

Chef Heidi Fink on lard: (excerpt from eat Magazine Jan 2010). Lard is better for you than shortening and better for cooking than vegetable oil. It is a whole food, a naturally saturated fat that is stable at high temperatures and won’t burn into trans-fats as it heats. Lard ( at 40%) is lower in saturated fats than butter 60 to 65 %, margarine 45%, and palm oil 80+%. Even better, most of the remaining fat in lard is made up of oleic acid, the very same kind of mono-unsaturated fat that makes olive oil so famously good for you. I am of course talking about home-made lard. I make my own lard so I can make the best pie crust! Shatteringly flaky.