Claziena, born in Heemskerk, Netherlands, emigrated to Nova Scotia with her husband  Cornelus and nine children in April 1939 and they bought a  dairy farm in the Annapolis valley. She was an accomplished baker, but her daughter Dora is even better says Dunnery about my mother-in-law. And I agree, she is the best baker I know. We recently convinced her to share one of her secret recipes with us for the joy of her grand-children. Of course, coming from a large family the recipe below will yield five dozen cookies, no less!

Form small balls about the size of a walnut , dip into sugar and set on a baking sheet so they will flatten out with the sugar on top. Bake about 10 minutes at 375 or until nicely brown.

This is the modified healthy version(Grand-Ma Dora’s). The original (Great Grand-Ma Claziena) called for one and half cup of shortening instead of butter, and  an extra half cup of sugar. Also the balls were not to be flattened but dipped in water before being dipped in sugar making them more chewy and less crispy. Dora prefers the cookies her way, crispy with a bit more snap. Of course, all the children and grand-children prefer the original recipe from their Dutch Oma. 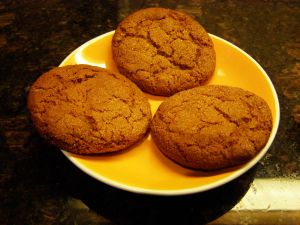 My two cents worth: I made five batches trying  round versus flatten, dip in water vs no dip, and the winner is : no dip, round shape. I had to turn my  oven down to 350 on convection bake to get the nice golden brown in 10 minutes.I thought five dozen cookies was a lot. Actually, the above gave me a count of six dozen, short of one. Perfect for taking sailing, ginger is good to prevent sea-sickness.

Penny ‘s UPdate or UPtake on this recipe:

“Today I baked ginger cookies.  I used your recipe, with the roll in sugar/Bake at 375 method.  However, I made them double ginger – added 1/2 cup chopped candied ginger at the end.  They are delicious!”